Despite the fact that smart phones have literally enabled us to have the whole of the world on our palm, the ridiculously small battery life of such expensive device is nothing less than a killjoy for many people. Thankfully though, Motorola RAZR MAXX is one phone that has finally packed so much power in its battery that has made it a power to be reckoned with. This might prove to be a major breakthrough for Motorola.

According to the stats revealed by various sources, RAZR MAXX boasts an impressive eight hours and twenty five minutes. On part of Motorola’s 4G Droidzilla, it is a huge achievement where it has beaten many of its other competitors which, despite being 3G, cannot match MAXX’s battery life. 4G LTE phones are notorious for their short battery life. In some phones, this battery life does not even have the power to last more than four hours. In speed however, these 4G LTE phones are blazing fast as compared to their 3G counterparts. Despite the high speed, ridiculously weak battery life was a prize consumers were not prepared to pay.

For months now, manufacturers have been experimenting with the different forms of lithium batteries, trying to eke more power out of it. Motorola, by no means the first mover in this regard has come on top. With smart phones getting slimmer and slimmer every day, decreased battery life was a problem that came with the sleek devices. Motorola however, has been able to pack a mind boggling 3,300 mAH batteries in its (still) razor thin RAZR MAXX.

Motorola was one company which was facing massive competition from left, right and centre. They have certainly upped their game with a series of impressive Android devices after which, the company finds itself in the league of the big players which include several notable Smartphone manufacturers. 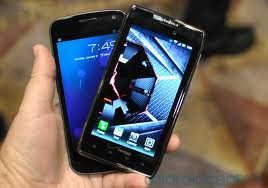