Police officers otherwise known as cops, five-o, Bobbies, the fuzz, gumshoe. Anyway there no short supply nick names we have for those who dedicated their lives to upholding the law. No matter which nick name you use. It’s like you have a strong image in your mind what a long foreman officer look like. Shiny metal badge, police stud duty belt and off cause the unmistakable blue uniform. It’s iconic unlike anything so well known as there was a reason to be came that way.

Let’s look at how police officers became known as the man women in blue. The first organize police post was resemble one we know today started in the UK in 200 years ago. In 1829 guy name sir Robert peel introduces the metropolitan police act to parliament. Forming the first properly trained and paid police department. Bobbies as the London police became known was giving this nick name after serve Robert. Peelers are another one but it is not quite stick. We see the first year’s officers in blue as the pear military style uniform color was chosen to keep people from confusing it with the British military uniforms. Which look similar but were red and white. The idea was the also make an officer appear more like a person on the street keeping them noticeable and approachable.

Simply enough right. But how and why this look carry over to US and the way cops dress today?
Is it just a simple case of copy and paste? Yes it is not really. The first police force established in the United States was in major cities. Boston in 1838 and New York in 1845. This was followed up over the next 20 years with departments forming in Chicago, new Orleans, Cincinnati, Philadelphia and yes pretty known all these police department followed models set by the London police. And that included the dark blue uniform. But as country grow new cities formed police departments. At some points someone try a uniform color right? Nope 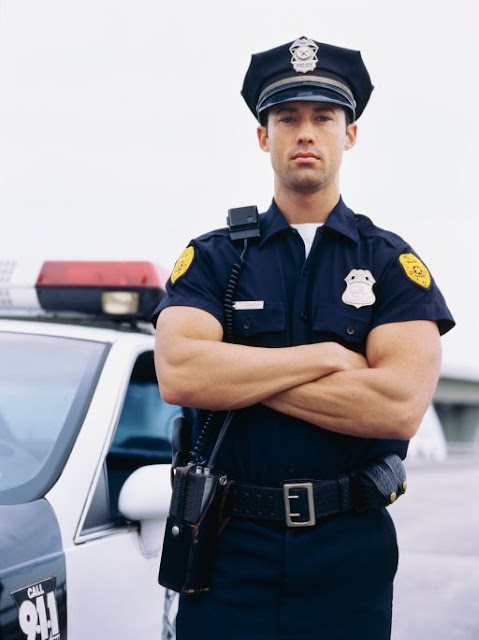 In the early department it was simply standard. But later the reason they didn’t that the new department lack imagination. According to the Los Angeles police department the original uniforms came from surplus union army uniforms which happen to be navy blue. They thought they look classy and present the officer as a person of authority. So why spend money on something new. Off cause the design will change as time out start. But that classic dark blue color stuck around.
Now in modern times the reason for will go beyond hand me down tradition from across the pod.  For one thing there is the cleanliness factor dark color is are known for simply been easier and less expensive to keep looking clean and sharp. And if you must anywhere for a few dozen to thirty thousand uniforms clean cheap and simple the only way to go.

Then there also the basic tactical advantage a dark uniform gives a gives an officer to night.