Truth of the lake michigan triangle


You know it’s not hard to imagine something mysterious like ships and plane vanishing in the Bermuda triangle. The ocean is big full of wonders out there. So what about a say lake is not so observed one as huge just like Michigan?

The Michigan triangle is a thing. And is just as early as unspeakable. First informers let’s get to know more about the one responsible for so many unexplained vanishing. The North American great lakes are massive. Which is why they don’t call pretty big lakes. Lake Michigan itself the fourth largest fresh water lake in the world. With the surface area 22,400 square miles. It’s got plenty of space to fit its own triangle. Capable of proofing vessels away in a blink of an eye. Now about that triangle it’s situated in lower half of the lake. With the corner at Manitowoc. In the other two Ludington and Benton harbor Michigan. It is 16 times smaller than the Bermuda triangle. The strange events happens here no less frequently. Specially keeping mind difference size some witnesses report seeing a strange glow under the surface. Others swear they saw a UFO in the sky is over the light. So many just feel uneasy been   there. So you ready to dive in.

The first case goes way back to the seventeen century when the great lake start to become means of moving goods for treating. That is also time when explore trying to find the North West passage connecting Atlantic and Pacific Ocean.

An august of 1679 French ship called Le Griffon which sailing across the uncharted waters of the great lakes. She was the first major size ship to sailing on the lake. And her mission to established large scale trade route in the area was knowing quite well. But when she made to sail Lake Michigan Le Griffon was just vanished. 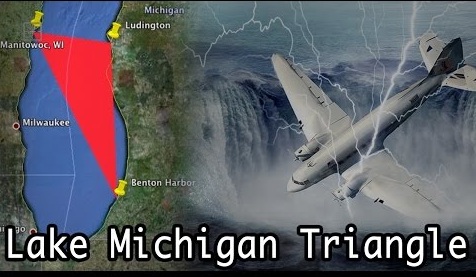 Well here we need to get something straight first. At the time a ship vanishing wasn’t really a headline making mystery like these days. You see if you have no mean ship detection radars and no way of rapid communications like radio. Vanishing technically happens every ship that one way or another. But this story has lots of puzzle pieces. For example the cause of Griffon disappearance was never for established. Some evident points at a sudden storm well others believe rival traders attacked and destroy the vessel. Plenty of theories but no real answers. The weird this is Le griffon rack age was never found.