Why the best railway in the world is China


China has the largest network of high speed trains in the world. It’s covered 15,500 miles all over the country. But well that all sound impressive. I can have but wonder why they spend a fortune on a building such a large bullet train network when airplane exist. Well here is what I found out. Let’s say you need to get Beijing to HongKong. I bet the first idea is come to your mind is hey why not catch a plane? It will be the fastest way to get there. But are you sure about that. First you need to get to the Beijing airport. Then you must find the way of this huge multi terminal transportation hub. After that if you came to the airport in advance you have to wait a bit more. And only then chances are to your flights will be delayed. And then another problem is that air space in china is incredibly congested and of this serious landing slots and what do you get at long times delayed.

But the plane is eventually takes off yay! And in 3.40 you’re in HongKong. But it is too early to celebrate. You arrived at the airport situated on in island. So you have to take one more train get into the city. 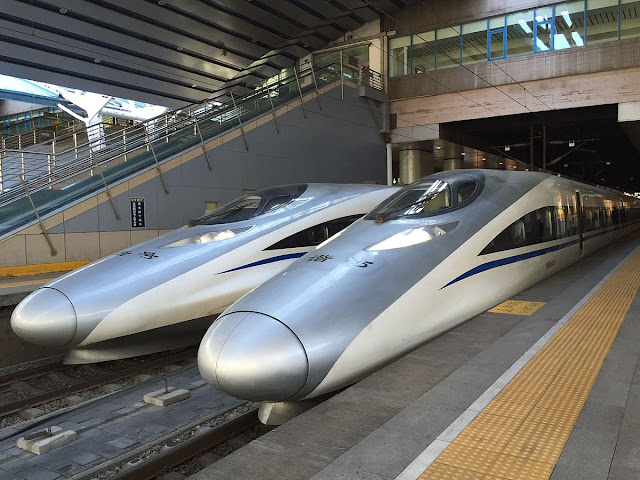 So now what about bullet trains? First most central train stations are down town. So you can easily reach them by subway. You don’t need to go through extensive pre-boarding security. And even if there some delays they don’t happen too often. And much shorter that on the airport. Also there wider seats more leg room freedom to move around. Modern bullet trains offer their passengers more comfort. The same can be said about planes right? Now when you arriving to HongKong. The train bring you to down town Kowloon station which is very convention. But the most important thing is the price. You can hand over $500 for Beijing to HongKong plane trip. But the same journey by train will cost you much less around $150. As for the travel time the train trip yes 5 hours longer that’s true. But you should remember that the 3 hours and 40 minute take to get from Beijing to HongKong is only the duration of the flight. If you add all the delays security checks, coming to the airport, come out from the last airport you get the picture. Now a days almost all chines travelers pick high speed train of a plain they need travel less than 500 miles. All about the distance between SanDiego and SacramentoCalifornia. When travel time doesn’t differ that much. Considering airport security check, train airport plane train again. Train ticket price is usually twice or even three times lower.