Aniston won the prize for her performance in the TV drama, The Morning Show.

Pitt was backstage because he had earlier received the Best Supporting Actor in a Film honor for his work in Once Upon a Time in Hollywood.


"We forever want to watch Brad watch Jen receive her Actor #sagawards," the clip was captioned.

SAG also posted a small gallery of photos of the former spouses smiling when they ran into each other earlier in the evening.

ETOnline reported the stars later attended the same Netflix after-party at Sunset Tower, but were not spotted interacting there. 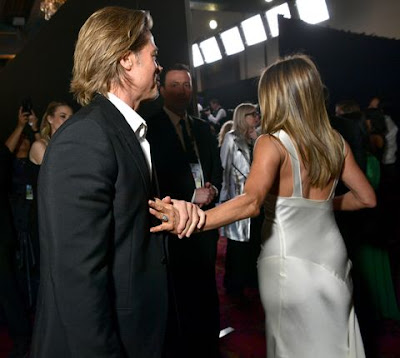 Pitt began a long-term romance with actress Angelina Jolie while he was still with Aniston.

Pitt and Jolie raised six children together and exchanged wedding vows in 2014.

Jolie, 44, filed for divorce from Pitt in 2016 and it was finalized last year.

Aniston married screenwriter and actor Justin Theroux, 48, in 2015 and they separated in 2017.