By Channaka
It wasn't the prettiest of wins, but it was an effective one as she mostly shut down anything Pennington had to offer with a clinch-heavy game plan.

Holly Holm was frustratingly in control in the first round. While Pennington was looking to create space to fire off punches The Preacher's Daughter was either keeping her distance or smothering Rocky against the cage.

There wasn't much action for the judges to glean a score from.


The strategy didn't change much for the former champion in the second round. She once again worked Pennington to the cage and worked knees to the body in a matter-of-fact pace that wasn't the most aesthetically pleasing.

It wasn't the most fan-friendly experience, but it was one that once again gave Holly Holm a lead on the scorecards. Pennington was almost completely neutralized. 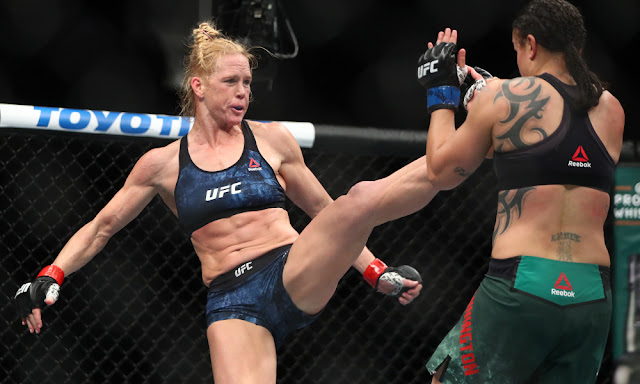 The trend continued in the third and final round as the bout mercifully came to an end. Holm's conservative approach might not have made her any fans, but it did get her hand raised.

Holly Holm was in dire need of a win coming into her first-ever UFC rematch. Holm was debuting in the UFC when she beat Pennington by decision. Now, she's a former champion battling to stay relevant.

The 38-year-old has been afforded three title shots since she lost the bantamweight belt to Miesha Tate in 2016. In that span, she went just 2-4. But this win will at least stave off retirement talk since she's proven she can still beat those fighters who aren't championship-caliber.

That's not the goal for Holly Holm, though. Despite her struggles to beat the likes of Amanda Nunes, Cris Cyborg and Germaine de Randamie, she still has a title in her sights.

I'm here for the gold, and I'm going to work to get there, and every fight I take just as seriously as the next."

Pennington was hoping to exorcise some career demons of her own in this bout. She has lost to each of the last three champions that she has fought with losses against Holly Holm (twice), de Randamie and Nunes.

Instead, Holm reminded fans that she isn't ready to go away just yet.