By Channaka
On March 10, 1940, a superman with unique physical and survival abilities was born in Ryan, Oklahoma, United States, to the point of being exceptionally amazing ... or at least that's what his fans claim.

It is known that the childhood of Carlos Ray Norris , his full name, was not entirely easy, as he used to be a weak and shy boy who did not do well in school , nothing to do with the legend of the action movies that Recent generations know primarily from memes where their bravery and strength are exaggerated to truly comical levels.


In 1958, upon reaching youth, Chuck Norris enlisted in the military and was sent to Osan Air Base in South Korea , where he had his first approach to martial arts and married his girlfriend Diane Holechek . His incorporation into the militia was a transcendental step in the course of his life, as he began to forge a new path in physical exercise that led him to mature mentally and bodily, and to master different branches of the martial arts. 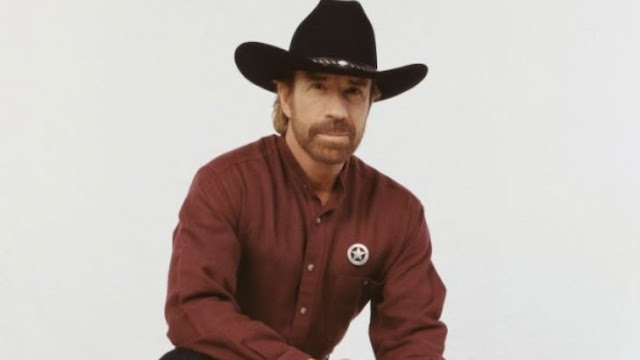 Such was his perseverance and determination in the eastern disciplines, that Chuck went down in history for being the first western man to obtain an eighth degree black tape from Grand Master Taekwondo in its 4,500 years of history. Without a doubt, an omen for what would come next.
After a few years of fighting and winning fights, his friend, actor Steve McQueen , nicknamed "The King of Cool", convinced him to abandon professional karate to focus on an acting career, starting one of the most iconic characters of action movies, with worldwide recognition and a large fan base.

Thus, he managed to participate in his first movie “Breaker! Breaker! ”, A low-budget film where he played a troubled trucker. After some television appearances that went almost unnoticed, the springboard that forever catapulted him to international fame was his participation in the movie "The Fury of the Dragon" , where the role of villain and enemy of superstar Bruce Lee , earned him the recognition of millions of admirers who celebrated his toughness and combat technique.

"Code of Silence," "Delta Force," "McQuade, Lone Wolf," "Invasion of the United States," "Disappeared in Combat," and "The Golden Temple," were the subsequent films where Chuck Norris flaunted his flying kicks, accurate punches and prodigious fighting skills.
Already in 1993 until 2001, his participation in the television series "Walker, Texas Ranger" , where impersonated Cordell Walker - a commission agent to provide security to the people of Dallas- reaffirmed its legendary status. In this fiction, the also writer displayed his abilities solving mysteries linked to crime , facing off-beat enemies: common villains, international terrorists, gryzzly bears and even evil spirits. In some episodes of the series, Chuck even travels in time, avoids theft of a laser beam, and helps a boy with psychic powers. Not bad for an average Texan.

Said exaggeration that positioned Chuck in the global collective imagination as an "alpha male without limits" gave way to a viral phenomenon already in the internet age: users on social networks began to share the "Chuck Norris Facts" , which are series of super exaggerated claims about the actor's toughness, sophistication and masculinity.

50 years after his emergence in the mass media, his image of a tough and courageous man continues to bear fruit ... and memes. Here are some of them.