The sample capsule landed in the autonomous region of Mongolia in northern China, including Beijing, in the early hours of the morning.
Sung Kejiang, head of China's National Space Agency, said the mission was successful in carrying unmanned lunar rock samples. Operation Chang'e5 is the first to carry lunar rock samples since 1976. It will be operated by China as a four-stage operation, including an orbiter in lunar orbit, a lander landing on the lunar surface, an Ascend spacecraft returning to orbit above it, and a return spacecraft to return samples to Earth. 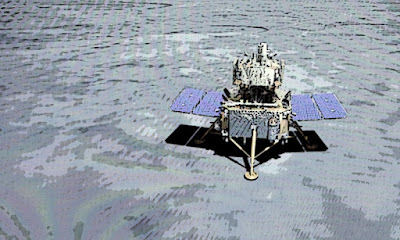 According to the agency, the return spacecraft carrying rock samples from the moon entered the Earth's atmosphere at around 1.33 am Beijing time yesterday. It was flying at a speed of 11.2 kilometers per hour. The spacecraft, which has been hit twice in the atmosphere, has begun to return to Earth under the force of gravity.

It was then opened to the parachute at an altitude of about 10 km above the Earth's surface. According to the Chinese National Space Agency, the return spacecraft landed safely at the pre-planned location. The capsule was safely seized by members of the security forces, including scientists who were stationed at the scene.
The capsule will be flown to Beijing. The container containing the rocks will then be handed over to the Lunar Sample Laboratory at the National Astronomical Observatory run by the Chinese Academy of Sciences.

This container has been sealed from the date of sampling to date. It is said that there are specially designed premises in this laboratory for the retention of samples taken from the moon. Scientists say that the samples should be taken care of not to come into contact with the Earth's atmosphere or water. The need to study the formation and composition of the Moon by these rock samples has led to the preservation of these samples.

Meanwhile, Yanhua, deputy head of China's National Space Administration, said that China would like to share part of the lunar rock sample brought to Earth after a successful mission with scientists from other parts of the world for future experiments.

He was speaking at a press conference at the State Council Information Office to raise awareness about the Chang'e-5 operation. He has also stated that another part of these samples will be displayed for public display in the future.