The diminutive Canon IXUS 500 HS is very stylishly designed, harking back to the classic rectangular styling of previous IXUS models. The IXUS 500's faceplate is an exercise in cool minimalism, its slightly textured surface broken only by the mirrored circular detailing of the lens surround, a tiny round window for the AF assist/self timer lamp above the lens, even smaller holes for the stereo microphone and speaker, and to the right of the lens a narrow sliver of a window for the on-board flash. As this is positioned at the far right edge of the faceplate, it does tend to fall prey to being obscured by your fingertips when gripping the camera with both hands to take a shot.

Weighing a mere 155g with the slim battery and tiny microSD memory card fitted and measuring just 19.2mm thick, the IXUS 500 HS slots comfortably into the palm of your hand. As its lens is internally stacked, it only protrudes from the body when the camera is in use, thus it can be easily stored in a trouser pocket between shots. Build quality is excellent, with a mix of mainly metal body and plastic buttons, controls and port covers. Like its other IXUS siblings, there's very little on the 500 HS to get a firm grip on, except five slightly raised dots on the right of the camera back that provides a small degree of purchase for your thumb.

The IXUS 500 HS' modest 10-megapixel CMOS sensor once again indicates that Canon is continuing to call a halt to the race for more megapixels in preference to improving said sensor's ability to perform better at higher ISO settings. The 12x lens is a real highlight on such a small and relatively slim camera, providing enough reach to take close-up sport and action shots, with the 28mm wide-crucially as wide as most rivals. It can also be digitally extended to 21x with the Zoom Plus option. The optically stabilized zoom provides a 3.5 stop advantage, very welcome given the 336mm maximum zoom setting, while the Intelligent IS system analyses the focal length, focal distance and type of camera movement and applies the most appropriate mode from seven possible settings.

The IXUS 500 HS has a large 3 inch LCD screen in the regular 4:3 format. The resolution of the LCD is a welcome 461k dots, and it's perfectly visible in all but the brightest sunlight. If you turn the IXUS 500 through 90° to shoot in portrait fashion, the images automatically orientate themselves when played back.

An operational feature shared with most recent IXUS offerings is Smart Auto with Scene Detection technology. This is Canon's version of other manufacturer's intelligent auto mode, whereby the user points the camera at a scene or subject and the IXUS 500 HS recognizes it and adjusts its settings accordingly to deliver optimal results with minimum user input. For example, if you point the lens at a close object the camera will switch to macro mode automatically, now detecting up to 58 scene types and choosing the most appropriate one, which is a lot more intuitive and reliable than trying to choose the correct mode yourself.
Further hand-holding features include face detection, auto red eye removal, blink detection - flagging up the fact that your subject has their eyes closed so you can take a replacement shot at the time - and the Smart Shutter mode. This lets you take a picture simply by either winking or smiling at the camera, or when another person enters the frame. Face ID registers up to 12 faces, automatically focuses on them, and then tags images with their names in playback. The Face Self-Timer option sets the camera to shoot automatically when it detects a new face appearing in the frame, useful for including the photographer in a group shot. The Smart Flash Exposure mode intelligently adjusts the built-in flash so that it doesn't overpower the main subject.

Photos are recorded to removable microSD media - there's no internal memory to fall back on and no cards are supplied in the box. The IXUS 500 offers an intuitive menu system for beginners thanks to the 'hints and tips' text that pops up when the user alights on a particular setting. More experienced users can deactivate this feature via the menus should it start to prove tiresome. ISO 100 through 3200 is selectable in Program mode, and among the 22 shooting modes is a Low Light mode that boosts the ISO to 6400 equivalent, albeit with a reduction in image size to 2.5 megapixels. The Handheld Night Scene mode combines several shots into one sharp and optimally-exposed image.

The IXUS 500 features the new Digit 5 processor 'under the hood' to keep things zipping along, with continuous shooting offered at a fairly snappy 2.8 frames per second at full resolution. If that isn't fast enough for you, the High Speed scene mode increases the burst speed to an impressive 6.8fps, albeit with a reduction in image size to just 2.5 megapixels.
There's the ability to record high definition 16:9 widescreen ratio movie clips at Full 1080p 1920 x 1280 pixels resolution at 24 frames per second with stereo sound in the Move format (H.264 compression level). There are also 1280 x 720 and 640 x 480 modes at 30 fps. A side mounted HDMI port is provided for hooking the camera up directly to a compatible device. You can also use the 12x optical zoom complete with image stabilizer when shooting movies, and thanks to the lens’ quiet drive system there's less audio interference when zooming than on other compacts. Unfortunately the zoom moves much more slowly during movies than when shooting a still image, seemingly the price you have to pay for the reduction in noise levels.
The Dynamic Image Stabilizer helps to reduce camera shake when recording your movies. A novel feature is the ability to capture movie footage at 240fps and then play it back at a much slower 30fps via the Super Slow Motion Movie mode, although only at a rather meager 320x240 pixel size. Smart Auto with Scene Detection technology is also available in the Movie mode, identifying the scene from 21 different options and adjusting its settings accordingly. There's also a creative Miniature Mode for still images and movies too, shooting footage at a slower frame rate and blurring parts of the image to make the subject look like small-scale models. The Movie Digest mode records the four seconds preceding each still image and combines all the clips from one day into a 720p HD video clip.

The top plate of the IXUS 500 HS features a band into which the operational buttons are recessed. There's a two setting slider switch for alternating between Smart Auto capture and Camera recording modes, a Playback button and an On/Off button. The main shutter release button is rounding, large, springy and obvious, encircled by a responsive zoom control lever with just the merest suggestion of a lip at the front for catching the forefinger.
Press down on the On/Off button and the IXUS 500 HS powers-up quickly in just over a second, the rear LCD bursting into life with a brief flash of the Canon HS logo before reproducing the scene before the lens, which extends to the 28mm wide-angle setting ready for the first image capture. A twist of the zoom lever and the lens powers through its focal range to maximum telephoto in just over three seconds, the transition smooth and steady. Take a shot in the regular single capture mode and the camera commits a full resolution JPEG to memory in around one second.

In the absence of an optical viewfinder the IXUS 500 HS's back plate is dominated by the previously mentioned 3-inch LCD, with 7 other rather small controls positioned to the right. A one-touch Movie Record button is logically located just under where your right thumb naturally grips the camera.

Underneath that are five buttons which effectively replicate the command/dial scroll wheel that most compacts have. It's here that alterations can be made to exposure compensation, flash settings (auto, on, slow synchrony, off, with the additional ability to implement automatic red eye reduction via the on-board menu folders), turning the display info on or off, which includes - in playback mode - bringing up capture details including, date, time, resolution and a histogram, and setting the auto-focus mode including normal, close up (to 1cm from a subject) or infinity. Unusually there's no manual focus mode, which will disappoint those looking for finer control than the AF system offers.

Any changes to the status quo are naturally effected with a press of the Function/Set button. While this simplifies the camera's external controls and provides room for the larger LCD screen, it does make the IXUS 500 HS a touch more difficult to operate, particularly if you're in a hurry. For example, we'd have liked Canon to have found room for a dedicated delete button somewhere on the camera back. As it is, no less than five button presses are required before a duff shot can be deleted.

Pressing the Function button brings up Canon's now familiar toolbar onto the screen, running from top to bottom of the left hand side of the screen rather than in the L-shape of previous generations of IXUS. If Smart Auto capture mode has been selected, here we get the chance to influence the self-timer, drive mode, image size and resolution, movie quality and that's it. Flick the top plate slider switch across a notch to the Program shooting mode, however, and many more users selectable options present themselves. Here you can tab down from the first option, Light Metering (evaluative, centre weighted or spot), and select one of the camera's additional built-in scene modes. Each time one of the options - from portraits to kids and pets, fireworks, aquarium and ISO 6400 equivalent low light mode - is highlighted, a small 'hints and tips' box of text appears instructing the user as to the benefits of and uses for the proposed settings.

A press of the Menu button at the bottom of the rear controls brings up two folders on-screen - the first containing the shooting menu, the second the more general purpose set up menu. Folder number one provides the ability to activate the digital zoom, call up grid lines or a 3:2 format ratio guide on screen, activate Canon's exposure adjusting I-Contrast, image stabilization modes (continuous, shoot only, active when panning, or off), plus face and blink detection. The second menu folder contains the Set Up menu, offering the chance to tweak various sound and start up options, plus format the optional but essential microSD card in use.
Leaving the back plate, the right hand flank of the IXUS 500 HS - if viewing it from the rear - features one covered port housing the mini-HDMI connection and a dual purpose AV out/USB connection. The base of the camera meanwhile features a standard metal screw thread for attaching it to a tripod, plus a sliding door protecting the microSD/microSDHC/microSDHX card port (with no internal memory to fall back on) and another for the rechargeable lithium-ion battery. Battery life is only around 190 shots from a full charge, which is below par rather than class leading. 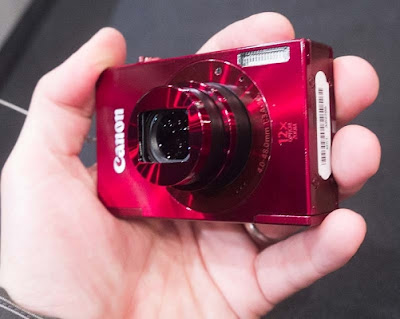 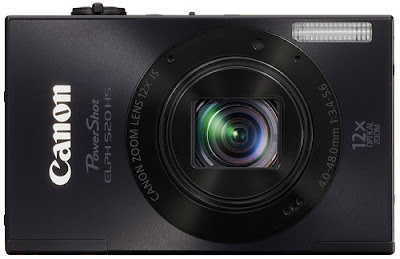 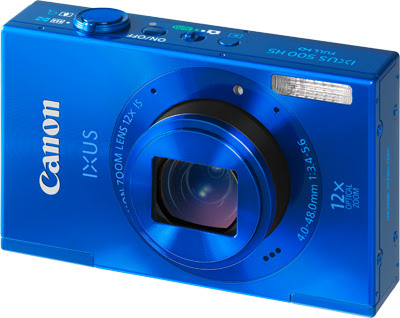 Naya Rivera dead after going missing while boating with son