By Channaka
Maybe Drew Brees really is Benjamin Button, as Sean Payton called him after his record-setting performance Monday night.

Perhaps Brees, like the character in the 2008 film The Curious Case of Benjamin Button, really is aging in reverse.

Maybe Brees started his NFL career when he was 40 and now he's really 22, the age he was when all of these records he has since broken seemed so far-fetched.

After Monday's 34-7 victory over the Indianapolis Colts where Brees set the record for career touchdown passes, he reflected to how crazy any of this would have sounded to him when he first entered the league.

He thought back to 2001 when he was a rookie with the San Diego Chargers and playing his first preseason game against the Miami Dolphins. He remembers looking up at the Dolphins' Ring of Honor and seeing Dan Marino's name up there and all those gaudy statistics beside it.

"I just sat there and my jaw just kinda dropped like 'how do you play that long and throw for that many yards and touchdowns and everything else?'" Brees recalled. "... You're sitting there thinking that's light years away. Now you look at the journey and here we are." 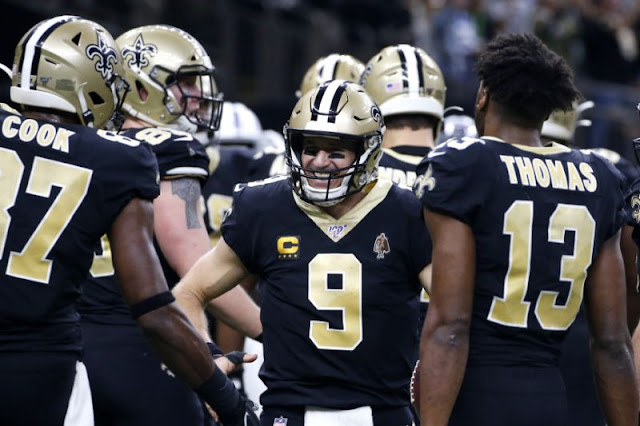 Brees, who many thought at one time wasn't quite tall enough to make it in the NFL, once again is standing above everyone else at the top of a list of one of the most precious records in all of football. His 5-yard touchdown pass to Josh Hill broke Peyton Manning's record of 539. Brees now holds the record for career passing yards, touchdowns and completion percentage. Former Washington Redskins' quarterback Sammy Baugh is the only other quarterback to hold all three of those records at the same time. But Baugh played in the 1930's, 40's and 50's. Plenty more quarterbacks so great that you only need a last name when you're talking about them have come along since then.

Brees has surpassed them all in the record books.

And chances are, this latest one could be broken as soon as Saturday when Tom Brady (538 touchdown career touchdown passes) and the New England Patriots play the Buffalo Bills. And chances are, Brees will have to break it again the next day when the Saints play the Tennessee Titans.

But for now, the record belongs to Brees, set on a night neither he nor the 73,053 people in the Mercedes Benz Superdome will ever forget.

The record-setting football is headed to the Pro Football Hall of Fame. Brees will be in Canton, Ohio someday too. That's if he ever actually decides to retire.

David Baker, president of the Pro Football Hall of Fame, normally comes to record-breaking games like the one Brees had Monday night.

Baker is usually there on the sideline wearing white gloves to keep the ball as sacred as possible before sending it off to the Hall of Fame.

This particular ball didn't need any white gloves. It barely touched the ground. Brees threw just one incompletion and finished 29 of 30 (an NFL record for completion percentage) for 307 yards and 4 touchdowns.

"I go out there with the expectation that the ball shouldn't touch the ground," Brees said.

And while 30 for 30 would have been perfect, Brees couldn't imagine a night going much better than this one did. His teammates from the Saints' Super Bowl season were there. So were two of his best friends from college. And of course Payton, the coach who believed in Brees and convinced him to come to New Orleans 13 years ago. Payton and Brees, who ave made magic ever since coming together in 2006, exchanged a big hug after the record breaker.

"I wouldn't be here without Sean," Brees said. "The time we've had together, the experiences we've had together from the very beginning. What he has built here as far as far as the foundation and the culture. (General manager) Mickey Loomis as well. Two of the most integral parts of this whole organization are certainly the reason I am here. I will forever be indebted to those guys."

And most importantly, Brees' family was there. After setting the record, he blew five kisses towards the section where his wife and kids were sitting. One for Brittany. One for Baylen. One for Bowen. One for Callen. And one for Rylen.

They get a chance to share in this. These are moments we can reflect on and we can talk about. They ask questions about it. When they get older, we can appreciate them more."

Except there's that one problem.

Games like this make you wonder if the ageless wonder in the No. 9 Saints' jersey is getting any older. Or is Payton right about Brees aging in reverse.

Is Brees really just a 22-year old kid chasing a dream? Or is he a 40-year old whose dreams just keep on coming true?

According to Brees, it's the latter.

"I get to come to work every day and do something I love to do and be around guys I want to be around," Brees said. "Not everybody gets to do that, So I consider myself very fortunate, very blessed to be a part of this team and play the game this long and have these special moments that I will remember forever."