By Channaka
NEW ORLEANS, LOUISIANA - JANUARY 16: Brandon Ingram 14 of the New Orleans Pelicans drives the ball ... around Royce O'Neale 23 of the Utah Jazz at Smoothie. Without Jrue Holiday, Zion Williamson, JJ Redick, and Kenrich Williams, the Pelicans played their “best defensive game of the season” according to Alvin Gentry. In doing so, New Orleans ended Utah’s league-best 10-game winning streak.

This last week, the Pelicans have proven the depth to match a star-driven contender’s playoff mettle. Donovan Mitchell got his buckets but the Pelicans notched the win thanks to their own young, emerging star.


And by star, everyone in New Orleans means Brandon Ingram. Even after Williamson makes his return, expect Ingram to get the only M-V-P chants from the crowd. Ingram does not have his own sneaker like Mitchell, but Ingram did seal the win over the Jazz. Twice, actually, only his game-winner in regulation was nullified by an albatross of a foul call on Rudy Gobert with 0.2 seconds remaining. 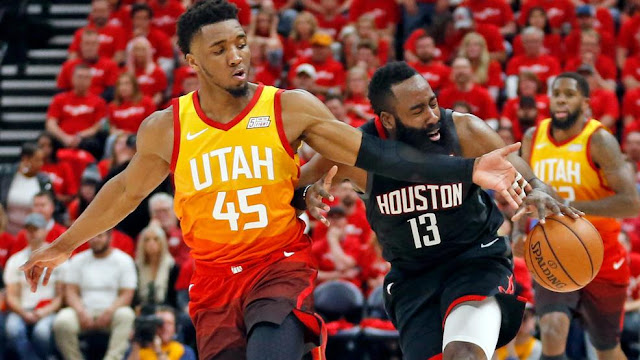 Still, the adrenaline was flowing through the building more than the alcohol once the fourth quarter starts. There were over 14,000 actual fans in the building, someone snuck in a bottle. However, liquor sales are cut off at the end of the third quarter. The atmosphere was so electric in the final frame, the New Orleans Pelicans bench did not sit during the fourth quarter.

Seriously. Even Jrue Holiday and Zion Williamson, the street clothes stars of the night, were up on the baseline for most of the quarter. Every Jaxson Hayes or Ingram highlight play was greeted by a genuine outburst of enthusiasm that is tough to find on a 16-win team.

New Orleans knew that to keep pace in the playoff race, it had to win at least one of the three games remaining before Williamson rejoins the rotation. It did not hurt that the Jazz were first to visit the Crescent City. The Pelicans wanted revenge for that no-call nonsense loss from ten days ago. It helped that Ingram wanted to show he was back to full strength after a slight injury scare.

Ingram posted a 49 points, 8 rebounds, 6 assists stat line. He shot 15-25 from the field, hitting 3-8 from deep. He fought through screens and found late buckets. They had a sense of urgency. Everybody came out and did something effective on the basketball floor and we brought out a win tonight.”

It was a fine return to the floor for Derrick Favors. Griffin credited Favors with the team’s turnaround in the same media scrum he announced Zion Williamson would be returning. Favors outplayed Rudy Gobert while posting a stat-stuffing double-double (21 points, 11 rebounds, 3 assists, 2 steals, 3 blocks. 10/12 shooting). Not for nothing: Favors had three fouls; Gobert fouled out.

Lonzo Ball (2/12, 1/5 from deep)had a rough night shooting but kept the ball moving (13 assists) and the pressure on the opposition. On a night where Ingram is an almost guaranteed bucket, that is all this team needs from Ball. An offensive guide who serves as a top-level defensive pest is a useful weapon to have in a playoff series.

Frank Jackson might have played his best defensive game as a professional. On defense, Jackson did a number on Donoval Mitchell in spurts. Mitchell could not get the ball when Jackson defended him. Jackson added 10 points, 3 rebounds, 1 assist in addition to his defensive work.

Josh Hart (9 points, 7 rebounds, 3 steals) and Nicolo Melli (7 points, 4 rebounds) were fine as spot starters. Once Holiday and Williamson are ready to return, both Hart and Melli will be top-end bench pieces for the second half of the season. Melli may benefit the most from Williamson’s return to the lineup.

Utah had won 15 of their last 16 games before visiting New Orleans. They only played one team with a winning record during that run. New Orleans has one of the easiest remaining schedules and gets to play those lottery teams when they are in full-on tank mode.

New Orleans did not quit on the season, nor the team nor the city. The players are still showing the belief, the body language, of potential contenders going through a rough patch but nearing the threshold to success. The Pelicans are a growing epidemic that will infect the season well past the Mardi Gras season. Attendance is up and The Zion Era begins in earnest next Wednesday against the San Antonio Spurs.

This season’s job is not yet done. However, it seems the New Orleans Pelicans will soon have all their tools ready to start building up the franchise, and rising up the standings, with the team that “Won’t Bow Down”.