By Channaka
Joe Burrow and the LSU Tigers capped their storybook season with a 42-25 victory over the Clemson Tigers in the national championship game.

The 2019 Heisman Trophy winner recovered from a slow start and threw for 463 yards and five touchdowns against an elite Clemson defense. In the process, he set a Football Bowl Subdivision single-season record for passing touchdowns (60). He added 58 yards and a touchdown on the ground, helping LSU amass 628 yards of offense.

Louisiana State also did a tremendous job limiting Clemson quarterback Trevor Lawrence, who went 18-of-37 for 234 yards. Clemson also finished a meager 1-of-11 on third down.

And, for the first time in 12 years, the national championship is headed back to Baton Rouge.

Just as most predicted, defense ruled the opening quarter. Both teams scored one touchdown and punted three times.
Clemson failed to capitalize on a couple of early scoring chances but still grabbed control of the game after about 20 minutes. Lawrence had a one-yard touchdown run, inconsistent kicker B.T. Potter nailed a 52-yard field goal, and star receiver Tee Higgins scored on a reverse 36 yards. 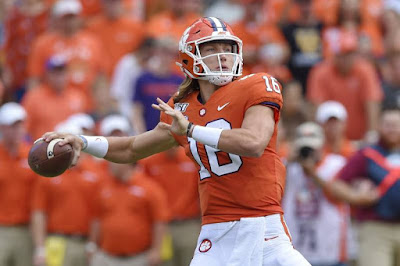 However, that 17-7 lead evaporated quickly.

Burrow found Chase for a 56-yard gain that preceded a short touchdown run for the quarterback. LSU forced a punt, then the quarterback engineered a six-play, 87-yard drive to snatch the lead. He capped the possession with a 14-yard score to Chase.


The Eagles playoff scenarios after Week 15, with Cowboys game looming next

Clemson once again punted, giving Burrow a chance to pad LSU's lead before halftime. Three third-down conversions helped LSU move down the field, and he hit Thaddeus Moss for a six-yard touchdown with 10 seconds remaining in the quarter.

LSU entered the locker room holding a 28-17 advantage and with a chance to extend the lead after receiving the kickoff to begin the third quarter.

The ACC squad forced a punt, scored a touchdown and added a two-point conversion to make it 28-25. The defense produced another three-and-out, but the offense failed to capitalize on its chance. LSU made Clemson pay.

Burrow orchestrated a six-play drive that covered 68 yards, ending with another short touchdown to Moss. It was the 59th touchdown of the year for the signal-caller to claim the FBS single-season record.

Clemson had a final chance after LSU's Cade York missed a field goal, but another punt ruined any hopes of a comeback.

Burrow lofted a perfect pass to Terrace Marshall Jr., who hauled in the 24-yard touchdown for a 42-25 advantage.

Clemson seemingly scored on the ensuing possession, but an offensive pass interference negated the score. The penalty also put Clemson in a 1st-and-25 hole, from which it could not recover before a game-sealing punt.

LSU proceeded to salt away the clock while also forcing and recovering a fumble on Clemson's final possession of the game.

Burrow earned Offensive MVP honors for his performance, while linebacker Patrick Queen earned the Defensive MVP after collecting eight tackles with 2.5 stops for loss and 0.5 sacks.