By Channaka
SAN DIEGO – Any time Tiger Woods returns to competitive golf after a long break, he makes sure to temper his zeal before putting a peg in the ground, and then he looks to discover a proper rhythm to the round as quickly as possible.

Sometimes, he has needed a few holes to find the right tempo, sometimes he has found it from the get-go. A few times, it has taken him so long to find a good pace that he can’t recover from too many mistakes made early in the round.


On Thursday in his latest return after a break of five weeks, Tiger Woods needed just two holes to get in tune at Torrey Pines in his 2020 debut. On the sun-splashed, seaside resort where he’s won eight times – including the 2008 U.S. Open on a broken leg – Woods eased his way into the new year with a satisfying 3-under 69 on the North Course for the first round of the Farmers Insurance Open.

A rookie set the pace, and that was Sebastian Cappelen of Denmark, the 341st-ranked player in the world. After finishing in a tie for sixth in last week’s American Express, he continued his good play with a 6-under 66 on the tougher South Course. 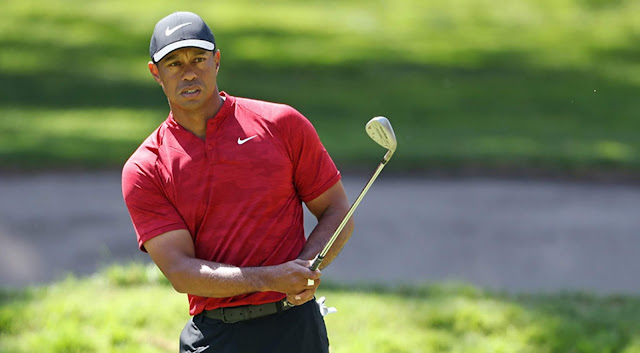 Keegan Bradley also had 66, though he played the North.

“I definitely was feeling it,” Woods said. “I missed the competition. I felt like I fought back and there’s a lot of positives heading to the South Course.”

After a pushed approach on the par-5 10th – his first hole of the round – and a chunked flop shot on the 11th from just in front of the green that led to a bogey, Tiger Woods didn’t miss too many shots going forward. That is, except for a chip on the 18th that had too much zip and rolled 45 feet from the hole and led to a bogey.

Other than that, he was calm, cool and collected on a serene day. Looking lean and fit and with nary a hint of rust, the world No. 6 made good use of his new TaylorMade SIM driver – he spent more than 90 minutes on the back of the range Tuesday getting the club dialed in.

“I felt like the start lines were a little bit tighter, which was nice,” Woods said. “Felt like I shaped the ball well off the tees. I didn’t quite get as many fairways as I needed to today, but overall all my misses were in good spots.”

In his quest for a record 83rd PGA Tour title – he won the Zozo Championship in Japan in his last PGA Tour start of 2019 to tie Sam Snead at 82 Tour titles – Woods played with world No. 3 Jon Rahm and just behind world No. 2 Rory McIlroy and made five birdies to offset two bogeys. He also made some solid pars, including at the eighth hole where he canned a five-footer.

As was his first round of the new decade.

“Overall, I was pleased to shoot something in the 60s,” Woods said. “I felt it was a positive start. The golf course is definitely gettable today, for sure. We all know the South is going to be the more difficult of the two courses. I could probably, maybe could have gotten maybe one or two more out of my round today, but overall I felt like it was a good start, especially going into the South Course.”

Rahm, who won the Farmers in 2017, shot 68. McIlroy, who finished in a tie for fifth last year in his first Farmers Insurance Open and can overtake Brooks Koepka as the No. 1 player in the world with a victory this week, birdied his last for a 67.

It was McIlroy’s first competitive round in nine weeks.

“I drove the ball well for the most part, hit a lot of good iron shots, made some good up-and-downs,” McIlroy said. “But I was a little rusty around the greens. My speed on the greens was a little off, but the more I play, that will get better. And to shoot 5 under you have to make a few putts.”

Among those joining McIlroy at 67 were Bubba Watson (South Course) and Ben An, Joel Dahmen, Xinjun Zhang, and Kevin Tway, who all played the North.