The story of the last Soviet Citizen

Have you seen Steven Spielberg's film "The Terminal" starring Tom Hanks in 2004? It is a story about a man named Victor Navoski, who comes to America from a particular country. This man lands in New York City unaware that he has become a stateless man as a result of the overthrow of his regime by a military coup. .Think what would happen if an event like this happened in space ...?

An astronaut had to face such an event. The story is about a man who was lost in space when he was in play, unable to return to Earth due to the political collapse and instability of his country.

Sergei Krikalev was a Soviet-born mechanical engineer and astronomer and rocket scientist.

One day in the spring of 1991, on May 19, 1991, a team from the Soyuz TM-12 spacecraft began orbiting the then-orbiting Mir space station. Engineer. 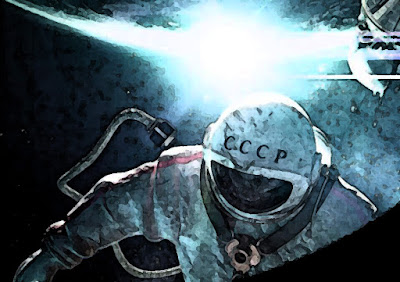 The trio flew from Kazakhstan, then part of the Soviet Union. A week later, Helen Patricia returned to Earth with her crew.

Their job was to stay in Mir until the next team arrived and continue the investigation.

For the next few months to locate new teams,
As a result, only one flight was left, which took place in October of the same year. When he had to stop, his companion, Anatoly Pavlovich, returned to Earth.

As a result, Sergei Krykalev had to be alone at the Mir space centre, which was orbiting 350 km above the ground.

Unexpectedly, one of the most significant events in world history took place during Serge's lonely departure from Earth at the Mir space centre, the collapse of the then - glorious Soviet Union.

Mikhail Gerchoff, who ruled the Soviet Union at the time, and the mighty Soviet Union went down in history on this day. The sudden upheaval of political power affected not only those on Earth, but also those in solitude far from Earth.
Sergei looks at the Earth from space without realizing it, as people line the streets of Moscow's Red Square battlefields!

Sergei received a call from Earth. Sergey was left alone in space indefinitely as his dream of returning home slowly faded.

Sergei, then 33, was married to a man who worked in the same space station. They also had a nine-month-old daughter.
When Sergei learns that his country is in chaos, he worries endlessly about how his beloved wife and child will live alone in such a background, but all he can do is look at the Earth from space.

The Mir Center had a dedicated spacecraft to take to Earth. Sergei was able to board the spaceship, but if he did, in control of the Mir Space Center. Otherwise,  in an instant. Sergei decided to give up the idea and wait as long as he could to save himself from Earth.
Another month passed quietly from Earth. But the result was the same as before. No money to bring back. !!

Another month has passed. But there is still no money. Therefore, it is not possible to bring Sergei to Earth  !!
Days, weeks, months passed like this. Sergei was in pain of loneliness in space.

Memories of his little daughter and his helpless wife hurt him even more.
The risk of cancer and weakening of the immune system afflicted him with every passing minute. Space life is like that. Under low gravity conditions, space life can severely oppress the body.
Time passed. The Mir centre carrying Sergei was spinning around the Earth.
Ten months passed like planned to end in five months. But now it's twice as long.

After the collapse, its prestige disappeared, and Russia plunged into a deep recession. To raise money for the state, they sold space travel to European countries with advanced economic status. These auctions bid very high. Fact, a TV reporter, went into space. Austria and Japan bought the spacecraft at the cost of $ 7 million and $ 12 million, respectively.

One day, at an auction like this, a German named "Close Dietrich Fleid" spends as much as $ 24 million to send a little man into space. Sergei's fate s changed by the short Germans he bought. Instead of sending their man, they donate to bring back Sergei who in area. Now Sergei is lucky enough to set foot on Earth again.

After 311 days in solitary confinement for ten months, the Soviet man orbited the Earth in orbit about 5,000 times, finally landing somewhere on March 25, 1992, in Kazakhstan had become an independent state. He was in a fragile condition. His blood was white as if he had been dead. He could not stand on his own two feet.
Although he was lucky to come to Earth, he saw a new world. Sergei experienced something like a.

When he left the Earth, he had nothing to return to. Sergei saw the change in the political authority of his country, the Soviet Union, and the creation of 15 independent states. His hometown, Leningrad, was St. Petersburg. Russia had become. The excellent economy had collapsed. An era had arisen in which the high salaries paid to scientists where for very little. Their nine-month-old baby had grown unexpectedly. The Soviet people had become Russians, the only remaining Soviet. Sergei realized that he was the only one who came from space. That's how he went down in history as the "last Soviet".

The timeline had flown an excellent way.